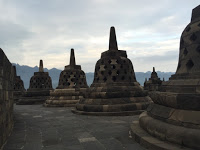 The Papal visit was all over the news when I started to plan the trip to Indonesia.
Planning a trip is a serious business. It’s the most exciting stage of the entire process. When I plan trips, I use the combined force of the imagination and technology. I like to use my journals, iOS apps (Hostelworld, TripIt, TripAdvisor, etc.), and lots of Google searches. The idea of discovering new places is such a bliss. But not to spoil the excitement, I keep it minimum since some plans are not always perfect. The holiday is so short that I need to be very efficient and and make decisions of the places to visit.
I grabbed my planner and plotted the flight schedules, hotels, and tours. The first step was to choose the perfect holiday location. I chose Indonesia this time since I haven’t really seen much of it the first time I went there. The list of places to go were Borobudur in Yogyakarta and the famous Mount Bromo in Surabaya.

1700h – Roads are closed. Oh no! But nothing could stop me after all the preparation I have done. I arrived at the airport on-time. The traffic was extra horrible. I also had to withraw some cash in Philippine pesos. I remember the time when I went to Kuala Lumpur and found out that my ATM card is not activated to work internationally. So this time, I had to make sure I have enough. Indonesia might not be credit card friendly.
My flight to Jakarta was smooth sailing. We arrived 5 minutes earlier than expected. So basically, I had to wait 5 hours and 5 minutes in the airport for my next flight. I had to change my Philippine money to Indonesian rupiah so that is the first priority within that period. It’s literally after midnight so it took me approximately 2 hours to find the Filipino-friendly Indonesian dude who hooked me up to a money changer guy. There’s a slight rip off in his exchange rates but it’s the only best one I could compare with the rates on Google.

0500h – Time to fly to Yogyakarta. I met this very friendly man who lives in Yogya. He advised me to go to Candi Prambanan, one of the other World Heritage sites in the city which is close to the airport. When we landed, I immediately took the opportunity to go to the recommended place.

One of the largest Hindu Temples in South East Asia. Candi Prambanan is a UNESCO World Heritage Site.
It’s a sunny day. Perfect for selfies and anything involving cameras and old structures. I took not less than 240 pictures in this place. There were hundreds of visitors since I got lucky and Indonesian schools took a tour the same time I am visiting the temples. I met Indonesian teachers trying to immerse their students to foreigners who speak English. I became one of the subjects when the students queued and ask basic questions in English. Of course, I don’t know if they were really paying attention to the words I was saying because most of them were trembling like scared kittens.

The Hunt for the Hostel

I booked my accomodation a a few weeks ago. Retra’s Hostel was the number one on the list and rated clean and safe in the comments section of HostelWorld.
The bus system of Yogya is very neat and organized. YogyaTrans has stations which takes you anywhere in the city. You don’t have to pay even when you need to transit from one bus to the other. Maybe they did not want to complicate things because they’re scared to speak English with foreigners like me. I had to take a taxi because the hostel was a few blocks away from the main road. When I arrived, I was so tired to do anything else but shower and sleep.

When I woke up, I had to eat something so there’s one restaurant nearby called Parsley. There was nothing special in the menu and I didn’t know what to order. I just got myself a nice Nasi Goreng and Indonesian Latte.

The next step is to book my tour to Borobudur in Magelang. I tried Google and the hostel attendant contacted tour companies to hook me up. The problem is that I’m alone and the minimum tour package is for two. So I had to pay double if I booked alone. The hostel attendant found another way by booking me with other guests from another hostel. Alas! I’m booked for tomorrow’s adventure and I have to wake up at 2:30am. I’m done for the day. Borobudur here I come.