Skip to content
The best thing to do when backpacking on a limited time is to research. I’ve joined a Facebook group called “Backpacking New Zealand” and found myself a travelmate from Germany. It is best to have a travelmate for sharing costs, planning, and great company. I did the South Island planning and my travelmate just tagged along with half of the travel plans already in place.

It was a good 3-hour flight from Sydney and I lost 2 hours in the time zone. I arrived at 10PM and the Kiwi driver outside the airport gave me a good deal of transport from the Airport to the City Centre. It was a better deal than the AirBus Express. He seemed desperate and the Kiwi accent shot me to the heart, along with his desperate tone, so I decided to take the offer. There were two other passengers from Hong Kong but they didn’t talk a lot so the driver and I had a bit of a chat. He took a different route and decided to pass by the Auckland War Museum. It was already closed but it’s worth the detour since there are zero happenings in the main route to the Auckland City Centre. I learned from the shuttle driver that there are only 4.5 million people in New Zealand and 1.5 million is in Auckland, the rest are scattered all over the rest of the North and South islands. There are more sheep and cows than human beings in the country.

Fast forward to the next day, I woke up and had my brekkie at Queen St., took pictures of the perimeter and took the Airbus Express back to the airport for my flight to Christchurch in South Island. I met my travelmate at the airport and off we go to CHR. 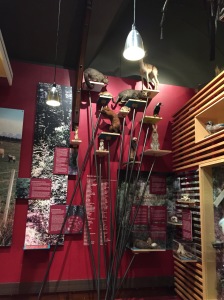 My former colleague Timothy, from Davao, now lives in Christchurch.  He picked us up from the airport and then we had an arvo snack at Perri Perri then we went to the Canterbury Museum to learn something about the region. Christchurch was wrecked in the 2011 earthquake so the city is not as great as it was before the incident. To be honest, it looks like a war zone with lots of orange cones in the streets. Aside from the museum, there are no other places to see in Christchurch plus the shops and restaurants close as early as 5PM.

The temperature dropped 3 degrees and my immediate response was to find the nearest heat emitting apparatus. Good thing there’s a shopping mall nearby  that’s still open – which means a heater system is still on to my advantage.  My friend Timothy left us (my travel mate and I) to the mall so we could shop for some food to eat while we begin to travel again Southward to Dunedin the next day. At the mall, I had the best-tasting strawberry milkshake ever. I swear I could never have it anywhere else in other parts of the galaxy.

In the evening, I went to a bar to have a drink with Dirk while my travelmate went elsewhere to plan his 2nd half of the trip with another travelmate. I never thought my bones could feel the intense cold of winter like this but the struggle is so real. One thing common about NZ and AU is that the beer is quite expensive. I didn’t drink a lot but it should be enough to call it a night and prepare for the next journey. It’s my first winter experience and it’s not fun being like a frozen meat.

FUN FACT: I haven’t seen a single cow/sheep since I came to Auckland and Christchurch. They might be hiding some place else.